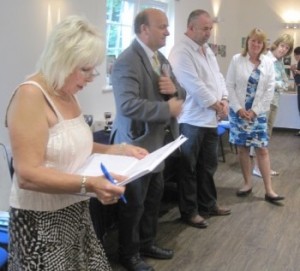 Helen reading out the winners of the trophies

The BGs Village Show on Saturday 20th September was a resounding success, with 60 individuals entering 187 entries into 32 classes – a brilliant response!

Here (left) is Wolfgang Bopp with his winning man-made cake.  Helen Lamb read out the list of the  winners of all the prize winners, alongside three of the four judges – Ray Broughton, Karen Hawkins and Clive Evans. The Poetry entries had been judged the night before by Tim Guilding as he was unable attend on the day. For more information on the judges, click here.

Ray was head judge and covered all the horticulture entries and children’s exhibits; Karen was the taster-in-chief of everything that had been cooked, plus the Children;s section, and Clive judged all the Arts and Crafts subjects.

All three judges then got together and judged the Scarecrows and then between them decided who should be the overall winner of the whole Show.

The list of all First Prize and Trophy Winners by class at the Beech Gardeners’ Summer Show are listed below: –

There was a table-full of cups to be won and although they are listed above, here they are again with some photos of the recipients below –

Performance cookies are used to understand and analyze the key performance indexes of the website which helps in delivering a better user experience for the visitors.

Analytical cookies are used to understand how visitors interact with the website. These cookies help provide information on metrics the number of visitors, bounce rate, traffic source, etc.

Advertisement cookies are used to provide visitors with relevant ads and marketing campaigns. These cookies track visitors across websites and collect information to provide customized ads.

Other uncategorized cookies are those that are being analyzed and have not been classified into a category as yet.

SAVE & ACCEPT
Powered by