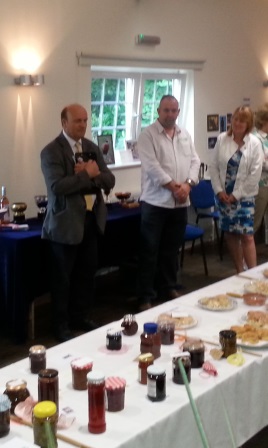 This was a return visit to Beech for Ray Broughton who has previously given talks organised by the Beech Gardeners (who organised the Village Show) in April 2014 and November 2013. He judged the Flower, Vegetable, Fruits and Floral Art classes as well as awarding the Golden Bowl for Best Entry in Show.

A lecturer at  Sparsholt College for many years, Ray now teaches staff and students at RHS Wisley. His impressive list of qualifications includes RHS Wisley Gardens Certificate (Honours); National Diploma in Horticulture (Distinction); Master of Horticulture RHS Stage 1; Certificate in Education; Fellow of the Institute of Horticulture; Licentiaship of the city and Guilds of London Institute.   He trained at Wisley gardens; has been teaching horticultural subjects for over 33 years; he is the senior RHS External Verifier for RHS;  and has been awarded the Fellowship of the Institute of Horticulture in recognition of his services to Horticultural Education.

Clive is the owner of Mainly Framing in Market Street, Alton, which specialises in wildlife photography, picture framing & local artworks. He brought his expertise to bear in the Arts & Crafts classes, specifically Photography, Paintings, Textiles and the Hand-made items for Winter.

Tim, who was formerly Head of Drama at Amery Hill School, was unable to attend the show itself but had judged the Poetry class the evening before.

Karen is a professional cake maker who teaches sugar craft in colleges in Hampshre, Surrey and Berkshire. She also co-runs Elizabeth Rose Vintage Teas. She was also returning to Beech, having demonstrated her cake-making skills at a highly successful MacMillan coffee morning in the Village Hall earlier this year. Karen judged all the Food classes as well as the Children’s section.

The three judges who were present on the day jointly agreed on the winner of the Scarecrows competition.