Well a lot has happened since our last update in July. Having made the decision to actually close the hall and focus entirely on getting on with the project, work has progressed rapidly. Most days will see Norman, Vic and Pete tackling the seemingly never ending schedule of work with the support of other local trades. But we are now close to the end of the “list”.

The new Hall has a commercial-standard kitchen

The old hall has been transformed, having been completely stripped out, windows replaced, doors moved, internal walls built, ceilings replaced, plastering completed and decoration (with your help) coming along too. We now have a new kitchen which is like night and day compared to what we previously had – can anyone remember that? Some visitors have been confused by the “shower” fitted over one of the kitchen sinks. This is in fact a “pre-rinse” pressure tap, so I don’t want to catch anyone taking a shower in the sink. Electricity is progressively getting turned on; although we are still working with bedside lights in the kitchen. I can assure you that it is not our long term intention to keep these!

The final floor coverings are now laid, after a long wait for the floor to dry out adequately, which took much longer than our suppliers promised. However, we decided that it was not worth rushing this and hope that you all like the final appearance (as it will be there for another hundred years!). The old and new halls now work together seamlessly.

A great deal of attention has been paid to insulation (acoustic and thermal) in both halls and a noise pollution system is being installed to ensure that noise levels do not get too high (this cuts power to amplifiers when noise exceeds pre-set levels). We thought this particularly necessary if we are all to watch England’s progress through the World Cup next year on our big screen! Come on England! 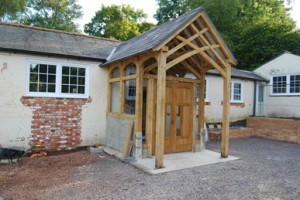 A stunning new entrance has been created

I should also mention that we now have a new bar too, although if you are not tall enough you will never get served, because we won’t be able to see you over the top! The bar, or Lounge area as we are starting to call it, can be shut off from the new hall with an acoustic dividing wall, which gives us more flexibility in terms of how the hall can be used.

Externally we have a fantastic new oak porch (made locally), which really does make a great first impression on arriving at our “new” hall. The trusses (holding up the roof) are a particular feature, having been inspired by the roof in Wells Cathedral; known as double scissor trusses they are very difficult to construct. We have also started work on creating an outdoor sitting area in anticipation of future sunny afternoons with a ramp to the old storerooms; this area will be paved with Indian sandstone shortly.

On this note, it was a great disappointment to discover one morning that someone had paid a visit to the hall and rather than just leave with some good impressions, decided to make off with a pallet load of our terracing. So if anyone offers you some terracing at a knock-down price then let me know! The cost was not the real issue, simply that this sort of thing can happen in Beech.

A great deal of work has gone on outside the hall, much of it in the ground so it will seldom be seen again. Whilst the drainage was being laid, additional work was carried out to improve the foundations of the old hall and reduce the likelihood of damp in future. Being a single skin building we can never completely make the building waterproof.

We did have an ambitious plan to finish the hall by early August, but some of our design decisions resulted in delay. This was primarily driven by the long lead time on the vaulted roof components as well as improvement to the old hall structure. We hope that you agree that these improvements were worth a slight delay, as we only intend to do this rebuild project once (I think!). We now anticipate being practically complete by late October, not so far behind schedule!

The Main Hall ready for use

These decisions did lead to some conflicts with our hall bookings and we are very appreciative of the understanding shown by the hall users during this testing period! However, even though the hall is not complete it’s great to see it being used so well.

During the early part of October we will be fitting out the new toilets, completing installation of lighting, fitting cupboard doors and re-installing our audio-visual equipment.

We will then turn our attention to external landscaping and the old storerooms, which we intend to convert into a meeting room (you may have noticed that windows have already been replaced) with a unisex WC and additional storage facilities. The whole of the old building complex will then be rendered to make it look like new.

With the project nearing completion we are also looking to ensure that we meet the conditions and objectives set by our funders, specifically concerning hall usage and operating costs. We still hope to have some funds left once the hall is complete, BUT we will need to keep generating funds for maintenance and to make future improvements. Bookings for the hall are already strong with a widening range of activities available.

We are however mindful that we retain a VILLAGE hall and intend to ensure a balance between the booking of regular events and other social activities. We will shortly have a Beech Village Hall that we can all be proud of.

Any cookies that may not be particularly necessary for the website to function and is used specifically to collect user personal data via analytics, ads, other embedded contents are termed as non-necessary cookies. It is mandatory to procure user consent prior to running these cookies on your website.