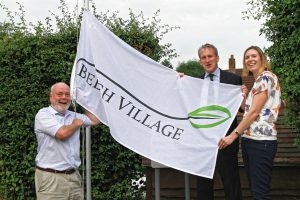 After meeting local villagers gathering at the Hall for their monthly Village Social, Damian Hinds and Nick Charman, Beech Village Hall Chair, both made short speeches followed by the new flag being raised to much applause.

The Village Hall flagpole, apart from celebrations such as the Queen’s Jubilee, is usually bare.  The Hall Committee decided to put a flag on it – and chose a Beech Village flag, with the village logo. “We thought it would be a bit of fun (not to take ourselves seriously) to have a ‘formal’ flag-raising at the June social” said Nick Charman, Chair of Beech Village Hall. “We are fortunate to have a secluded Hall and Village Green so a flag would also do a great job making the Hall more visible”.