The 2nd house to be built in Alton, in Amery Street

On Wednesday 1st June on a fairly chilly cloudy afternoon the Beech Gardeners met up in the Library car park for a walk round Alton, guided for the 2nd time by Jim Dickinson.  We walked out of the car park via the footpath into Amery Street and stopped and looked at the building opposite the footpath.  Jim told us this was the 2nd house to be built in Alton.  The houses up the hill from this house had brick front walls – but this was a snobby thing as it was a boast that “we can afford bricks”.  But around the back it was timber framed like the older one next door (photo).

We walked up Amery Street and turned left into Market Street stopping at the computer shop on the left hand side.  There Jim pointed out the framework for the original jetted building and he said that the shop was able to grab a bit more space by coming out onto the pavement with the front window (photo).

From there we entered the alleyway that led back to the car park.  When we got to the back of the shops there was a public right of way through the shops and the restaurant at the front.  This right of way has been written into their Deeds and must be observed.  In the High Street we crossed over and walked up Turk Streeet stopping on the way to look at a building (photo in the gallery below).

We then carried on past the roundabout into “old” Turk Street and down to Ashdell Road.  We stopped at the Brewmaster’s House and then on under the railway arch to the Kings Pond area.  Just at the right time a steam engine ran overhead.  We entered the woods on the left via a path parallel to Ashdell Road.  All these trees were ash trees, all the same age, height etc, as when the Town Council acquired the land from the brewery they just let it go and the ash seedlings took over.  We then crossed Ashdell Road and walked up Crowley Drive into Ashdell Park.  There. Henry Gauvain had built his wonderful mansion and wanted an avenue of Wellingtonians – and the species was Sequoia Wellingtonia.  (photo)

We went back down the hill and crossed over Ashdell Road to Kings Pond where the ducks were being fed and the Canadian geese were looking after their little goslings.  We stopped at an oak tree (species??) the wood of which is good for the bungs in the beer barrels – allows the beer to breathe and not let the bugs in.

From Kings Pond we wandered through a footpath to the Waterside Court flats and had a look at the river in a culvert, coming from two different direction towards one another, and then disappearing under the road.  We walked out into Station Road, pausing at the gold painted pillar box in celebration of Peter Charles’ Olympic gold medal in the Equestrian section.  We walked under the railway bridge to have a look at Rock Cottage, made from leftovers in the Welsh slate industry and painted white. (photo)

From there we took the footpath alongside the railway line to Alresford.  We came out by the Police station and walked into the car park next to the Swan Hotel.  We walked across the footbridge over the River Wey to inspect the other side of the old building alongside the Wey.  We stood in the car park of the Swan and Jim told us about how the coaches and horses could come in from the High Street, off load their trunks from the top of the coach straight into the first floor of this hotel building.  (photo) 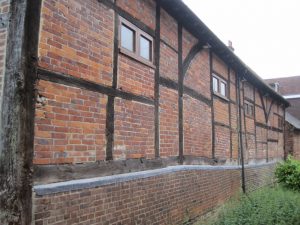 The old building alongside the Wey, off the High Street

From there we walked out into Alton High Street and down Bakers passage towards the Library.  We stopped and had a look at the type of tree the Council is planting on pavements etc, with non-invasive roots and no fruit for people to slip on.  This particular tree was a Blind Pear (photo in the gallery below).  We crossed back into the Library car park where we looked at the giant Weeping Willow almost standing in the river.  Jim said it was a mere “teenager” in tree terms and would be growing much larger (photo).

And so ended our walk.  Thank you Jim for making it so informative.

If anybody sees any typos or wrong information in this script do please let me know.  If you know species or variety of trees that I have forgotten the names of please phone me (AB)

Any cookies that may not be particularly necessary for the website to function and is used specifically to collect user personal data via analytics, ads, other embedded contents are termed as non-necessary cookies. It is mandatory to procure user consent prior to running these cookies on your website.