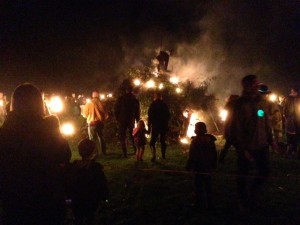 The bonfire and the guy on top are blazing well

Beech’s Fireworks party went off with a bang on 7 November at the Recreation Ground and a fantastic time was had by all. The weather cleared up at about 3.00pm after a week which started with a 3-day clamp down of thick fog, then rain, rain, rain. Everyone arrived at the Beech Village Hall at 5.00pm, where Stella, George, Imogen, Richard and Anne were selling tickets, torches and glowing necklaces ready for the procession up Wellhouse Road, which left the hall at about 5.30.  The procession looked wonderful and was beautifully marshalled by Ian and Peter, arriving at the Recreation Ground dead on time, where Nicky was selling tickets.  Ian was the chief marshal with Peter doing great stuff with his megaphone.  He organised the procession to circle slowly round the unlit bonfire close to the ropes until all the children and parents were in.  Nick climbed on top of the bonfire to place the guy in position and it was then lit by the two Nicks from the centre.  Then a few at a time Peter instructed the children to move forward and throw their flaming torches onto the bonfire.  Nick and Nick had gone to so much trouble to keep the bonfire dry during such inclement weather that it went up like tinder.  The children’s torches did the rest and it was soon flaming high in the air.

The food and drink then went on sale with Sarah and Jo filling the buns with hot dogs and burgers which Howard and Dan were cooking like mad.  Graham and Ann were selling hot mulled wine which they were brewing busily on a camping stove.  When most people had been served the fireworks started – this year sourced and collected by John – and let off by Nick.  They were beautiful and below is a gallery of some of the photos taken by Nick and Stella’s week-end guest Tom –

Nick has sent in a little report and thanks to all those helpers in front and behind the scenes.  “We think the number of people attending was around 230 and another statistic, by my count, 24 people were involved in putting this event together.  And the weather was as good as we could have hoped for.  Above all it was a great success, judging from the feedback on the night and by email since.  Much enjoyed by the villagers and others who came along.  So to all of you who got stuck in, in one way or another:- 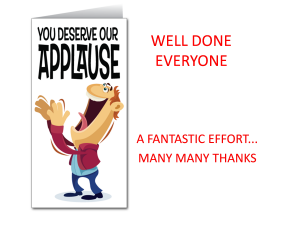 I am always scared when writing thanks like this that I have left someone out – and so if you know someone who contributed who is not in the email address list, or I have the wrong email address, can you pass this on, or tell me and I will email direct?  I know that I have some email addresses here, where another of your family helped – so please make sure they see this too!

The Village Hall Facebook page has some pictures, already, and they will be on the Website soon.

My thanks for all the effort!  Much appreciated!