The annual Adult Christmas Party is always a must-attend event in Beech, and this year proved no exception! No sooner had the doors opened at 7.30pm on Saturday 14th December than the Hall began to fill with villagers and their guests, all in their festive finest. With around 75 people in attendance the Hall was filled to capacity, and it was particularly nice to see a number of new (and not so new) villagers attending for the first time!

Pre-dinner drinks and chit-chat soon gave way to the first of the evening’s events – the traditional Christmas dinner! Our thanks once again to Sandra Johnson and her colleague John, whose experience cooking for the Watercress Belle ensured that the meal was really exceptional, and to the excellent waiting team led by Victoria Scott. While most of the room tucked into roast turkey with all the trimmings (including a much-admired cognac, prune and apple stuffing), vegetarians enjoyed a butternut squash, blue cheese and sage tart, followed by Christmas pudding and mince pies. 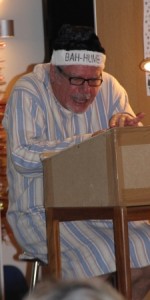 Once their audience had been fed (and watered!) sufficiently, the brave members of this year’s Beech Village Panto crew disappeared backstage to prepare for their big moment. Writer/directors Colin and Sue Britchford, together with all the cast, prop- and costume-makers deserve a vote of thanks for reviving this longstanding village tradition after a gap of several years. Details of the production were shrouded (pun intended!) in secrecy ahead of the night, but the appearance of bowls of humbugs on each table as dinner came to an end provided a broad hint as to the likely storyline.

In the event we were treated to a truly unique performance of A Christmas Carol, with Peter Cox’s Scrooge undergoing his seasonal transformation thanks to visitations by the ghosts of (Bob) Marley – complete with dreadlocks and reggae soundtrack – Christmas Past, Christmas Present and Christmas Yet to Come. Other highlights included an impressively Irish Bob O’Scratchit and his decidedly English-sounding son (not so) Tiny Tim, not to mention the imaginative and amusing sound effects (a huge thanks to Paul Flemming). Finally, how can we forget the props and costumes provided by Val and Dave Toombs with Dave’s Door forever in our thoughts – another big thank you!

If you missed the panto – or have a burning desire to see it again – thanks to the wonders of modern technology you can simply follow this link!

Panto over, it was time for the village to hit the dance floor and, thanks to the welcome return of Paul Fleming and his DJing skills, this didn’t take long to accomplish! As usual, anyone still around as things wound down at midnight pitched in to help with the clearing up before wending their way home.

On the way out, generous partygoers dropped nearly £80 into the “tip bucket” which will be put towards the waiting team’s volunteer trip to Kenya in April.Whilst it’s probably fair to say that the production won’t be troubling this year’s Olivier Awards committee (!), it was littered with the kind of in-jokes and occasional mishaps that make village productions so much fun, so “hats off” to all those villagers who were prepared to make fools of themselves in front of their friends and neighbours to ensure the Christmas Party was a resounding success! Hopefully this spark will now ignite a continuation of the Panto tradition in Beech in future years!