We went to Weir House gardens in Old Alresford on a beautiful afternoon.

It had been described as: –

“Spectacular riverside garden with sweeping lawn backed by old walls, yew buttresses and mixed perennial beds.  Contemporary vegetable and cut flower gardens would be at their height in September.

Also includes a newly designed garden around pool area, bog garden and wilder walkways through wooded areas.  Covered by many magazines and TV programmes over the last 15 years.” 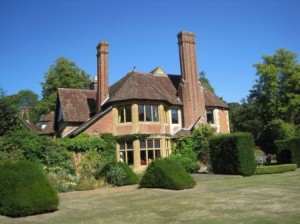 We were guided around by their gardener  who was very informative and showed us the river passing through the grounds and the enormous lawn surrounded by the yew buttresses – see right.

The lawn and the mixed perennial beds were suffering enormously from the drought and hot weather.  The bog garden was fine though as the river passed through it.

The BGs at Weir House

We went through mysterious doorways into other walled gardens full of vegetables, fruit, cut flowers, and we also saw the new pool garden with its grasses.

None of us ventured into the wilder walkways through the wooded areas as most of the ladies were wearing sandals on such a hot day.

The flowers in the cut flower garden were amazing, especially the sunflowers – I have never seen so many different types of them – some are pictured below  –

Following are some of the wonder displays of colour

Below are a few more 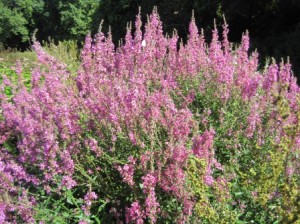 Poor Kate was overcome by the heat and was treated by the paramedics but was sent home by Winchester Hospital during the evening with no lasting ill-effects.

Unfortunately there was no tea served for us so we all went home a little thirsty.