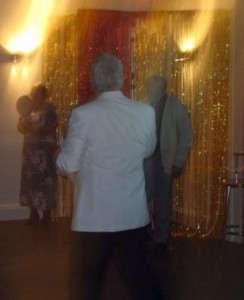 After a quiet January, the Beech 2010 social calendar was kicked off in style in February with the return of the Valentine’s Night Party. Proving once again that Beech residents never let ‘romance’ get in the way of a good party, the highlight of the evening was a very amusing – and occasionally insightful – local version of “Celebrity Mr & Mrs”. Compered by a tuxedo-clad (and thus almost unrecognizable!) Peter Cox, the contest was eventually won by Alan and Elaine King, with Phil and Wendy Ladds very worthy runners up. Thanks as always to the army of volunteers led by Louse Stagg who made it all possible.

Later that same month the Hall was buzzing with creativity as around 20 villagers of all ages gathered to learn from artist Antony Mapes how to unleash their inner cartoonist. Thanks to Hampshire County Council’s Hog the Limelight initiative, attendees learned how the addition of a few carefully-positioned lines can add expression and emotion to even the simplest of cartoon faces. Four hours later, even the most artistically-challenged students had produced a finished cartoon character to take pride of place on the fridge!

In early March, the Village Hall was full to capacity for its Official Opening by former resident Alan Titchmarsh. Then just a week later it was time for Peter Cox to take to the stage again (but this time without his tux!) to chair another highly anticipated Quiz Night. Around 60 people, divided into the usual teams of eight (or thereabouts!), scratched heads and conferred under the watchful eye of adjudicator Sally Cox. Eventually, the team led by Philip and Louise Bennett of Wellhouse Road beat off stiff competition to claim the much sought-after prize of … a rather small Easter Egg each!

Eggs were also the big attraction on Easter Sunday when 24 children gathered in glorious spring sunshine for the annual Easter Egg hunt on the Recreation Ground. The Easter Bunny (who was in attendance) had helped hide over 100 brightly coloured plastic eggs in the daffodils, and any child who manage to collect six of these could exchange them for a full-sized chocolate egg. Although some were very well hidden, even the youngest participants succeeded in the task, with the Easter Bunny herself (who bore a more than passing resemblance to Caroline Ward!) providing plenty of great photo opportunities!